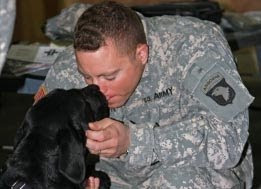 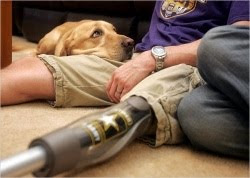 For the first time in the history of the United States Army, skilled therapy dogs, provided by America’s VetDogs, will be deployed to Iraq to help relieve combat stress of soldiers in the field. These two specially trained dogs will work with a multidisciplinary team of Army professionals to address mental health issues as they arise in theater.

Says Major Stacie Caswell, commander of the 85th Medical Detachment, “Dogs have been the unsung heroes of our war efforts. Bringing therapy dogs into Iraq will take dogs to the next level on the battlefield. The therapy dogs will be another method that our Combat Stress teams can use to break down mental health stigma and assist soldiers.”

Anecdotal evidence has existed for years that pets provide positive health benefits such as blood pressure and stress reduction, but more recently, scientific studies have been conducted to determine the validity of pet therapy.

Staff Sergeants Jack Greene and Mike Calaway, certified occupational therapy assistants with the 85th Medical Detachment and currently deployed to Iraq, were given temporary duty assignments to the campus of America’s VetDogs in Smithtown, N.Y. in December 2007 to bond and learn how to work with their new charges.

After an intensive five-day training program, Budge and Boe were formally presented to the Army during the handover ceremony on December 13. According to Wells Jones, CEO of America’s VetDogs, “We are privileged and proud to have the opportunity to give something back to the men and women who dedicate themselves to our country. We’re honored to serve those who have served us.”

The dogs will accompany Greene and Calaway as they work with soldiers, whether in a one-to-one or group setting, to cope with homefront issues, sleep problems, or day-to-day operational stress. Budge and Boe can help provide emotional comfort through physical interactions such as playing fetch or simple petting.

Says Greene, “The dogs have a natural, uncanny way of reducing stress. It’s kind of magical.” Calaway concurs. “They will be great morale boosters as members of the team,” he adds.
America’s VetDogs is honored to make the gift of these special canines to the Army’s 85th Medical Detachment, and proud to be called to serve the valiant men and women who serve our country.

America’s VetDogs, a subsidiary of the Guide Dog Foundation for the Blind, offers guide and service dogs to veterans of all eras. A major component of the program is to provide service dogs to members of the military recently wounded in combat.

Posted by BellaRustica at 8:04 PM