And so it begins...
In law enforcement, whenever we begin what will amount to be a big case we name it - sometimes officially, sometimes unofficially. Well, since I am re-modeling a rental I have decided this commitment amounts to no less than an official operation so I have have named it accordingly - Operazione Cucina (Operation Kitchen). I moved across the United States from lovely Coronado, California to the equally as lovely Saint Simon's Island, Georgia. Yes, I have a thing for islands - moving on.
My landlord didn't make a peep when I said I came with three dogs - Labradors Retrievers no less - so I am thankful for the great, old beach cottage (now called BellaRustica Cottage) blocks from the Atlantic Ocean and a gorgeous Dog Beach. The trade-off is that I have now installed $1500.00 in fencing and have initiated a kitchen remodel at my own expense. The rotted back deck is being repaired and paid for by the home owner.
My challenge was to re-model an otherwise poorly functional kitchen. There is only one drawer, and a total of seven cabinets only. Two of those cabinets are under the sink and the rest are oddly positioned around an ill thought-out island that sits right in the middle of the kitchen. In my professional life I am required to consider all angles, every reason a person might rationalize for their behavior, but this one remains a mystery to me. And so it begins, Operazione Cucina.
In order to remain in budget I priced unfinished cabinets from a variety of sources and settle on Lowes. I buy two only - one for under the sink and the other (15 inches) for one side of the stove - $200.00. Given the restrictions of kitchen dimensions, I am limited to off-the-shelf choices so I decide on open shelving to finish the cabinet area as I cannot find exact dimensions to cover the additional square footage. I have hired Jimmy Butler, a local contractor, who comes well recommended from a good friend. He is professional, darling, exceedingly bright, painfully shy, and more importantly, willing to work with me. He has to agree (did he?) to "being blogged" and I encourage him with the fact that perhaps he might meet an interesting gal out of this whole thing. 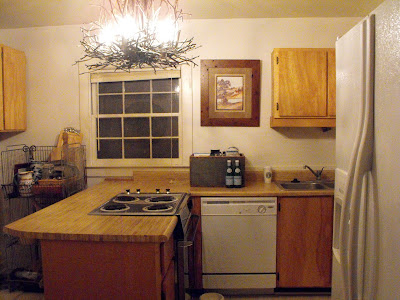 The kitchen "before". Although I am no cook, there was not enough room for basic pots and pans, dinnerware, and pantry items in this kitchen. The wall to the left had a washer/dryer hook up underneath and cabinets overhead that required ducking when you opened them. You can see how I had to stack my wire baskets with items that had no place to go. 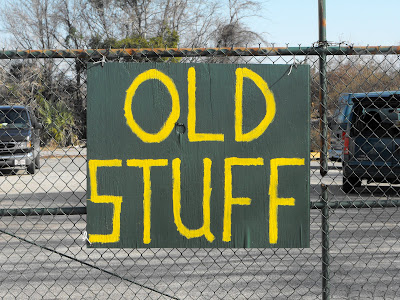 I wanted to move the cabinetry to the floor and along the walls in an L-shape for maximum open space within the kitchen. Once I decided on the cabinets, I focused on counter tops. Lowes "no big deal" synthetic counter tops would cost me about $200.00 for a 12 foot and 6 foot piece. No thanks. I investigated other options. On my way in to work I noticed this sign for OLD STUFF and HEART PINE so I pulled in one day and met Hondo, master wood craftsman extraordinaire. Hondo manages a lumber mill and builds gorgeous tables in this old warehouse in his off-time. He also rescues dog and cats and was just beginning the relationship with a tiny, bob-tailed abandoned kitten when I met him. I knew I was in good hands when he showed me how he'd not only set out food and water but had a rather ingenious plan for the eventual winning over of this little one. It became immediately evident Hondo was an old-hand at this so I decided I was in the right place for my very secondary and material needs. 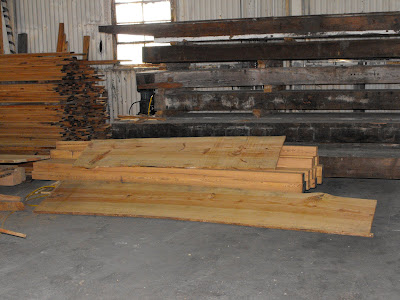 He set aside and kindly delivered two pieces of Southern Yellow Pine for my countertops. Cost to me with delivery - $200.00. 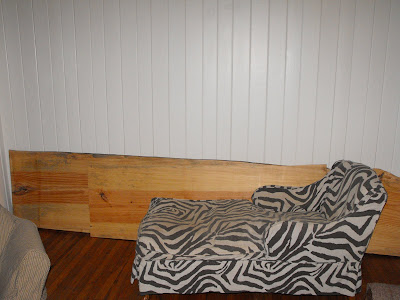 Of course it started to rain on the first day of Operazione Cucina but that did not deter me one bit. We simply brought our lovely Southern Yellow Pine inside for the night. 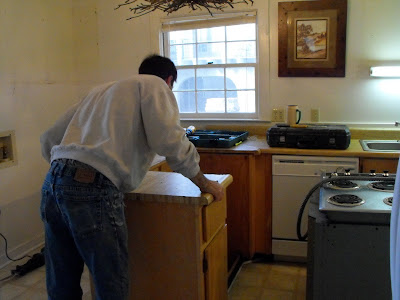 This morning Jimmy Butler arrived on time and began dismantling La Cucina. I call him Jimmy Butler like people tend to call me Kim Kelly. I have the hardest time getting him to smile for the camera though. He likely thinks me such a nuisance but tolerates me quietly.
Photos tomorrow of the two-cabinet install, custom shelving in between those cabinets, continued removal of the laminate flooring, and my very-lazy effort to "paint" (read: spray paint) and then wash the walls with a combination of glaze and raw umber. Since I only needed to even out the areas on the walls where the old upper cabinets were mounted I opted for spray painting using a standard white as the walls were white. Even though I know there are 100 WHITES I just needed to clean it up enough to create a "backdrop" for glazing. I love the natural look of glazing walls and furniture but I also like the practical aspects of it. I can glaze an entire room in an hour whereas painting might take me six hours. Results domani (tomorrow) - you judge.
Buona Notte - Kim

Posted by BellaRustica at 5:48 PM