On November 15, I reported that I found Beau his "forever" home but it did not work out.  Four days after taking him home he was left alone for the first time for a couple of hours. Apparently, Beau stood on his hind legs at the front door and chewed around the framing of the glass panels on the front door.  Because he was never alone here with my other dogs I did not think to counsel on a degree of separation anxiety. He has never once damaged anything in my home in the months I have had him.  The agreement was that if he did not work out, he comes back to me and he did so, quite happily I might add.  He's a great dog but not a perfect one.  Beau is a very bright 2-3 year old neutered male, house & manner trained, energetic but not hyper, loyal & protective, is good with other dogs and great with people.
Still waiting for his new home... 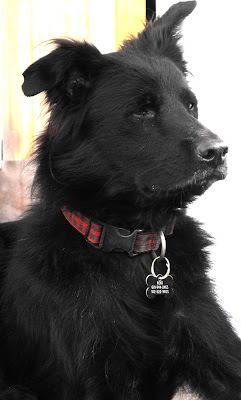 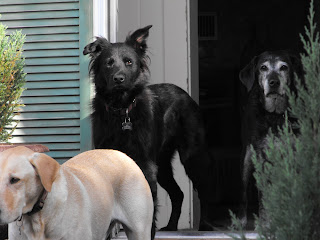 Beau, with Kenyon and my beloved Paws, who died last month. Scout is taking the photo... 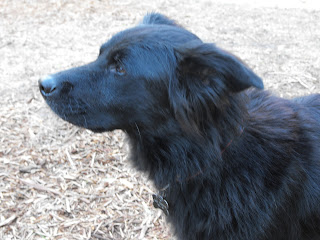 After:  A visit to the vet the next day defined a treatment plan for the hook/heart worm and fleas.  Within 30 days, assisted by an organic diet loaded with Omega 3 (Flax), Beau's fur quality and quantity improved dramatically.  His appetite increased and as he settled in his big personality became more apparent.  I have since learned he is part Border Collie. What a fascinating and loyal breed they are.  I had a plumber in the other day and Beau herded him to the bathroom and then sat and waited.  Every time the plumber left, Beau would follow him right at his side and then resume the watchful eye.  When the plumber was walking through the house to leave, Beau again walked immediately beside him escorting him out. 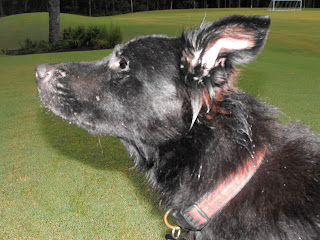 Before:  Within days of taking him in - underweight, lifeless and missing patches of fur, fleas, hook worm, & the curse of The South - heart worm.   I had gone back to the beach that night to look for him after taking my 3 pups home and found him in the parking lot trying to get into cars with people who were leaving.  I leashed him up and walked him home and gave him a good bath in the yard before he walked himself through the dog door and curled up on the couch.  He made himself at home so quickly the other dogs did not entirely know how to react.
For the next 30 days we worked on manners (he was trained) and tried to either find him his original home (which I am not sure I would have returned him to) or to find him a new home.
Posted by BellaRustica at 4:36 PM